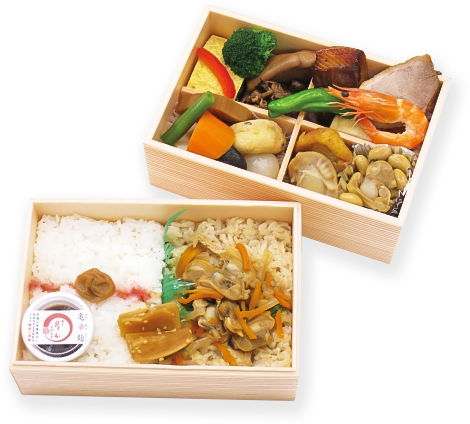 It is said to be during the reign of Prince Shotoku that the thin rectangular wood skin on which sutra was written was named Kyogi (paper-thin sheet of wood) and its manufacturing technique was introduced into Japan from China.

It was not until the Edo period during which wood sheet paperboard boxes became the popular choice for Japanese bento container to bear the heat and humidity of Japanese climate. The wood sheet paperboard boxes remain popular today with Makunouchi Bento served during the intermissions of theater performances; Ekiben (railway boxed meal), the perfect company for a railroad journey; Ohanami Bento (picnic food for sakura viewing); and Sushiori (sushi box) dad brings home as a souvenir once in a while, and continue to evolve and embellish our everyday lives.

The paperboard box store founded by Kuwakichi Inagaki in the early years of the Meiji era became known as "Orikuwa" in honor of the first owner Kuwakichi's nickname "Kuwa-san" and manufactured and sold paperboard boxes for bento boxes in Kameido Town, Koto Ward, along the old Chiba street. Delivering paper money and yokan (sweet bean jelly) on a vessel to Narita mountain via waterway was a typical daily scene back then. After the Second World War, Orikuwa relocated to Hirai, Edogawa Ward.

Orikuwa reorganized itself in 1978 into Orikuwa Co., Ltd. The manufacturing technology of paperboard boxes nurtured over 100 years was passed down from the fourth owner Shozo Inagaki to the fifth owner Koichi Inagaki, and combine with new ideas, a wide range of materials and shapes are available for better presentation of food. It is said that the origin of luncheon packed in a chip box dates back to Makunouchi Bento served during the short intermissions of theater performances for the audience during the Edo period. As railroad became widespread later in history, Ekiben with local specialties became prevalent. Today, paperboard boxes play an essential role in the lives of Japanese people as seen with convenience store lunch boxes, Hanami Bento, Japanese traditional ceremonial meals, and so on.

We manufacture bento boxes with all our heart, hoping that our boxes will embellish mother's handmade bento box, box lunch made by a professional chef, department store bento box and every possible food scene.

We plan and manufacture with our clients. Please feel free to consult us.